Is There A Doctor In The House? 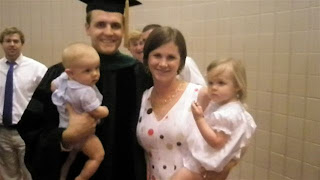 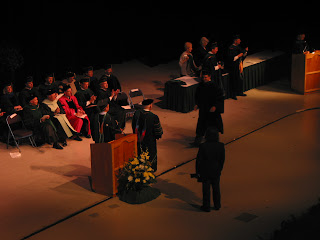 Crossing the stage to sign his name as Brandon Slagley M.D. It cracked me up that they had them sign their new signature and projected it on the overhead for the audience to see. 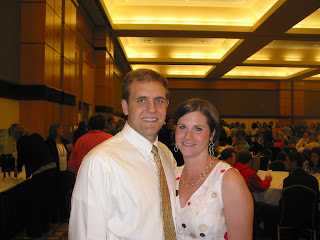 Brandon is officially done with medical school! He graduated yesterday and we had a great time celebrating. We went to brunch with my family before graduation and then we had everyone over for dessert after the ceremony. The kids did surprisingly well, considering that graduation was in the middle of naptime! Luckily, Uncle Derek took care of Kate and let her color, play with stickers, have some snack, and run around the corridor outside the ceremony. At one point, I turned around to see that Kate was putting stickers all over his face and saying that she "needed" more stickers. My mom rocked Blake to sleep, so I really could relax and see what was going on. It was still incredibly boring because it took forever. Kate got a good "YAY DADDY!" in at the ceremony. We are so proud of him- it has been a long road (and will be for 3 more years of residency), but he has made it look easy!
Other news- Kate will turn 2 in just a week and a half, and she is acting more like the "terrible 2s" than ever before. We are leaving both kids with their Papa G and JoJo this weekend to go to the beach! This is probably the last vacation with no kids we will have for a while.
Blake is starting to sleep a little better. After cutting 2 teeth together, then having a double ear infection, I think he just got into the habit of waking up around 3 or 4; but we are breaking that habit now. I have been letting him cry it out until I have tried to sleep for 45 minutes or so, and then I will put his pacifier back in and he will last until 6 or 7. I want him to be in a good routine for his grandparents so they don't have to be zombies with no sleep. At his 6 month appointment, Dr. Peters said she wouldn't be surprised to see him crawling soon (she said he was a compact ball of muscle). Last week, he was acting like he wanted to, but he couldn't get his arms to move with his legs. In the last 2 days, he has started getting somewhere! Slowly, but surely... I set him on one side of the rug and put toys in front of him just out of his reach and I sit at the other side cheering him on, and he army crawls!
I will post soon with more recent pictures of the kids since my wireless internet is working now.
Posted by The Slagleys at 10:08 AM 5 comments:

Blake is 6 months old!!! Can you believe how quickly time flies? He and I went to the doctor this morning while Kate stayed home with her daddy. It is amazing how peaceful things are with just Blake, and I am not chasing Kate around or cramming her sippy cup in her mouth to keep her quiet in waiting rooms. Blake just jumped in my lap and giggled at the other kids while we waited for an hour and a half.
He weighs 16 pounds and 4 oz, and is 26 inches tall. He is down to the 35% for weight, but still around 50% for height. Dr. Peters said that she could tell he is energetic and he may just get really distracted while he is feeding. I have no idea what could be so exciting at our house. :) I have a hard time getting him to eat while Kate is around because he wants to keep his eyes on her at all times. I am still nursing him (hope that isn't TMI), but Dr. Peters says she thinks I need to supplement him with formula after each feed to make sure he is getting enough. I have been trying to keep up the nursing because it is free, it is good for him, and it is nice to not have to mix bottles while he is screaming to tell me he is hungry (mainly because it is free). But, I am really fine if he is ready to stop. I have tried just about everything to keep it up, but I don't think it will last much longer, 6 months was a good stretch! He is loving solid food too. He grunts in between bites just to remind me that he is not done yet. He starts a jump-like movement in his highchair when he sees the bowl coming. Funny! I don't remember Kate being this crazy about food at this point. He just cut 2 teeth and he is growing up way too fast.
Here is a little gripe about UAB's horrible insurance plan... we pay out the wazoo for insurance that made me pick a primary care provider off of their list (and I really didn't want to have to go downtown to UAB just to go to the doctor), so I picked one to claim on my card. I really thought I could get away with never using that doctor since I have been pregnant or nursing for the past 2+ years, and I always use my OB. But, I went yesterday to treat this sinus infection that I have had for over 2 weeks now, and I waited for over 2 hours. No joke! I sat in the waiting room and watched all the nurses just stroll on in after their lunch break and stand around and chit chat for a while until they called me to the front. Once I went to the front, the lady handed me my chart and told me to go to Module 2. Where the heck is Module 2 and why am I carrying my own chart down the hall to who knows where? What ever happened to the sweet lady calling you from the waiting room to go back to see the doctor after 30 minutes wait time max? Anyway, once I found Module 2, guess what it was? Another waiting room! So, I sat and waited, then got called back to a patient room, where I continued to wait. Finally, I saw a doctor who confirmed what I told him I already knew- I have a sinus infection. He gave me an antibiotic and nose spray (I hate those with a burning passion).
I went on my merry way, but when I called Brandon to tell him what he had prescribed, he laughed and said that isn't what he would have done at all. He said, "That is definitely not the first line of treatment for sinuses." That is not exactly what I wanted to hear after waiting forever just to get the prescription in the first place. But, we figured out that he was probably writing for a mild antibiotic that would not bother breastfeeding. Then, I got to Publix to fill my prescription and they told me that I was not insured. I am pretty sure we just paid a pretty penny in March to continue coverage until Brandon starts work in July. I argued with them to the point of tears because I just wanted my medicine and to go home, but they said it would be really expensive to get them filled without insurance. So, I got home and asked Brandon to call VIVA to ask them about it. They said it was just a computer "glitch" and that everything is fine now, that their system had just accidentally dropped me and the kids in February. That is the second or third accidental dropping of me and the kids that has led to embarassing/frustrating situations at doctors' offices and pharmacies. It was all worked out yesterday afternoon so that we wouldn't have any problems at the pediatrician's office today.
Until I went to take his prescription to get filled. Of course our insurance wouldn't cover that medicine either, so I am waiting on his doctor to call VIVA and authorize that medicine. By the way, if she didn't authorize that prescription, why would she write for it? I hate VIVA, but we only have it for another month or so. At least Blake was insured today, that would have sent me over the edge.
Posted by The Slagleys at 2:55 PM No comments: 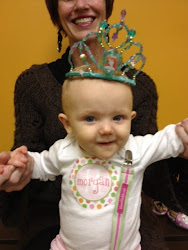